FNCARES develops resources to educate about the structural drivers of disadvantage and encourage discussion and actions that promote culturally-based equity and justice for First Nations children and youth. 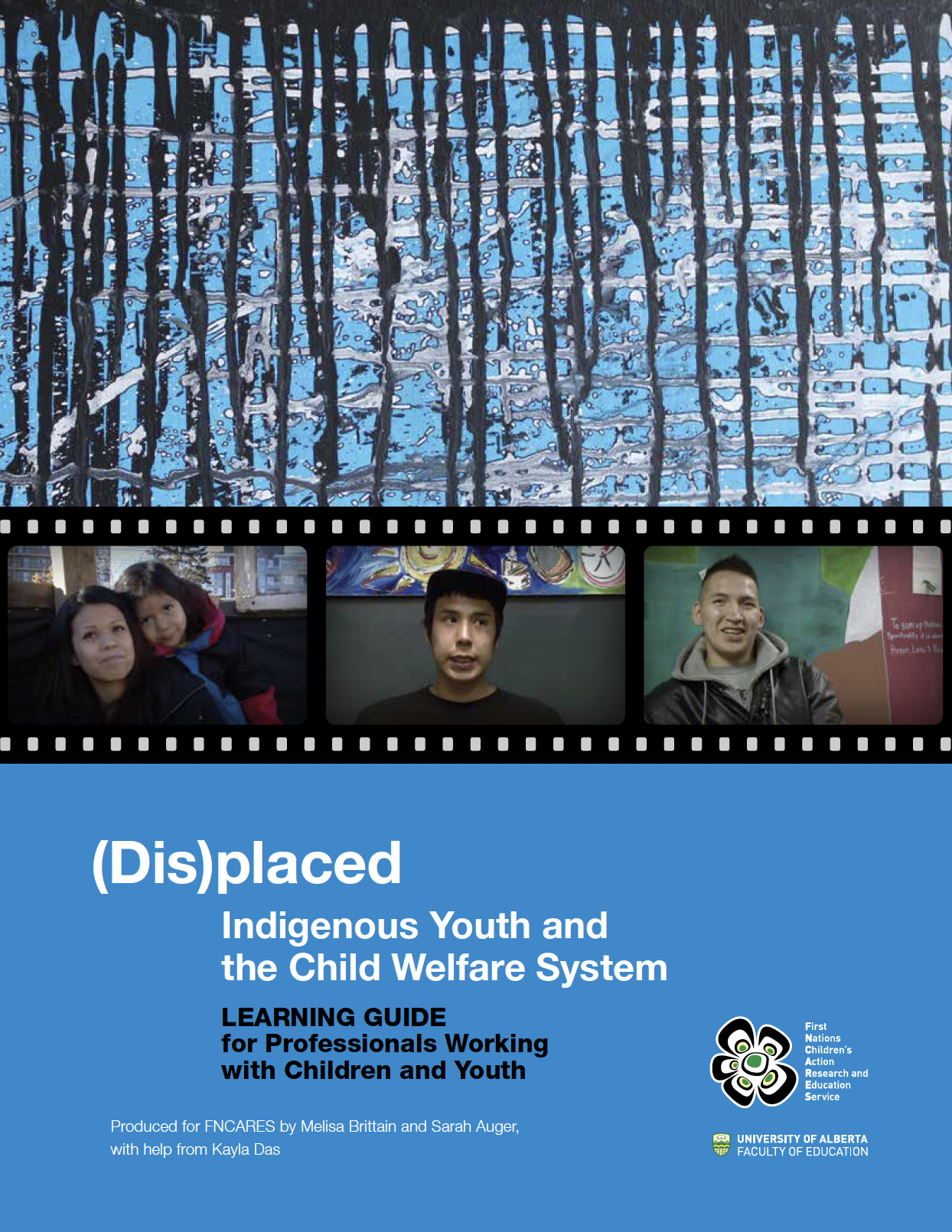 by Melisa Brittain and Sarah Auger, with help from Kayla Das

This new learning guide is designed to accompany our documentary film (Dis)placed: Indigenous Youth and the Child Welfare System, which features the voices of Indigenous youth reflecting on their prior involvement with the child welfare system and on their multiple strategies of resistance to assimilation and state control.

Designed especially for those working in the child welfare system and other allied professions involved in providing services to Indigenous children and youth impacted by the system, it is ideal for running workshops for professionals. It can also be adapted for less formal group or individual learning.

The guide is divided into four themed sections that provide crucial background information in the following areas:

Each of the four themed sections of the learning guide include suggested activities and discussion questions, and the references and additional resources sections provide learners with links to hundreds of sources to help them more easily expand their knowledge beyond the content of the film and the learning guide.

by Sarah Auger and Melisa Brittain

This teaching guide for grades 9-12 is designed to accompany the documentary film (Dis)placed: Indigenous Youth and the Child Welfare System. The film features the voices of Indigenous youth as they reflect on their prior involvement with child welfare and share their multiple strategies of resistance to assimilation and state control. The guide provides teachers with necessary background information on the connections between Canada's colonial history, especially residential schools, and the ongoing inequities experienced by First Nations children and youth. Questions and activities structured around four themed lessons will help students understand these connections, as well as the following: the role of family, community, and culture in identity formation and belonging; how art, storytelling, and the revival of cultural practices can be powerful sites of learning, resistance, and healing; and how they can exercise their citizenship responsibilities by taking action in an ongoing social justice movement that addresses the root causes of ongoing discrimination.

by Melisa Brittain and Cindy Blackstock

This five-chapter literature review and analysis examines existing research on First Nations child poverty contextualized within the historical and contemporary manifestations of colonialism in Canada.

FNCARES Spring Talk - A National Crime: Is it Over?

This panel discussion is in honour of the 100th year anniversary of the publication of Dr. Peter Henderson Bryce's The Story of a National Crime, which outlines Bryce's attempts to reveal the devastating rates of illness and death of Indigenous children in residential schools. This discussion is especially pertinent in the context of the ongoing discovery of unmarked children's graves on the grounds of former residential schools and the dominant Canadian narrative that asserts that people back then didn't know any better, and that racist and discriminatory policies that allowed the residential schools to exist are a thing of the past.

In this virtual talk, speakers discuss what mind control is, how it perpetuates colonization in Canada, and how it influences the colonial agenda and colonial practices, at both individual and institutional levels.

This is a video of a free online public lecture with Cindy Blackstock, Hadley Friedland, and Koren Lightning-Earle on April 22, 2021.

In this webinar, the speakers discuss emerging issues with Bill C-92 since it became law on January 1, 2020. Discussion included issues pertaining to jurisdiction, national standards, funding, and the government's ongoing non-compliance with elements of the Canadian Human Rights Tribunal's ruling on First Nations child welfare.

This is video of a free public lecture by Cindy Blackstock and Hadley Friedland on Nov. 6, 2019 in the Faculty of Law, University of Alberta, Edmonton.

Canada's colonial practice of forcibly removing Indigenous children from their families did not end with the closing of Indian residential schools. It continues today in the form of provincial and territorial child welfare systems, which remove Indigenous children and youth at unprecedented rates. This film features the voices of Indigenous youth as they reflect on their prior involvement with child welfare and share their multiple strategies of resistance to assimilation and state control. Adding to these insights, First Nations child advocate Cindy Blackstock traces the term 'neglect', the main rationale for child welfare removals, to its roots in the residential school system, and points to laws that codify structural discrimination as the leading cause of child welfare (dis)placements. Read more about the film at KingCrip Productions. This film is distributed by V Tape. There are special rates for community organizations, public libraries and high schools.

Q & A Session with Alanis Obomsawin and Cindy Blackstock

This video shows the Q & A session with director Alanis Obomsawin and Cindy Blackstock following the FNCARES screening of We can't make the same mistake twice in Edmonton February 12, 2017. This stunning NFB documentary follows the Human Rights case launched against the government of Canada for racially discriminating against First Nations children. Click here to learn how you can watch We Can't Make the Same Mistake Twice (NFB, 2016, 163 min).